The piece treats texts by Poe, cummings and Mallarmé as “musical fragments” — specifically, Poe’s The Tell-Tale Heart serves, in a more modest setting, a similar function as that of Mahler in Berio’s Sinfonia: some sort of ongoing, complete background quotation of an entire work, onto which various other elements are grafted. (*) Clear quotations appear once more: Nono and Stockhausen being the most prominent, so to speak. From Berio’s A-Ronne, I borrowed a vocal process of splitting vowels and consonants of a same word among different singers. When these borrowings appear, they are usually connected to some portion of text that makes some direct or indirect commentary on the object being borrowed; and the original sources are indicated explicitly on the score. These borrowings, however, have nothing of nostalgic or ironic; they simply try to pay homage to these bits of music that were inspiring for me, and integrate these “strange” materials into the narrative of my own piece. (*) Again, I use an actor to deliver spoken text; this reflects a distrust that I have from very early on in handing spoken words to traditionally trained singers. They seem to loose all musicality of speech in usually bland and uncomfortable readings of spoken text among sang material. I have been much happier in working with actors, in general, than with singers.

This work is licensed under a Creative Commons Attribution-NonCommercial-ShareAlike 3.0 Unported License. 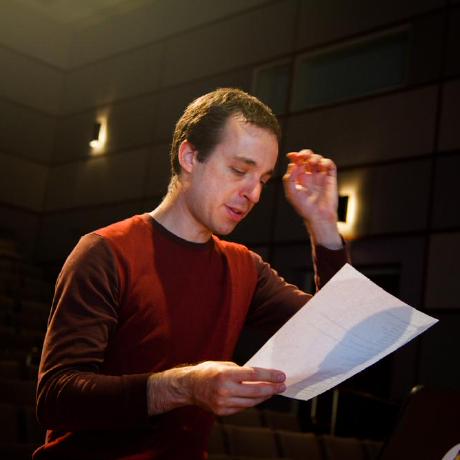